Adult picky eaters: how to increase variety in your diet 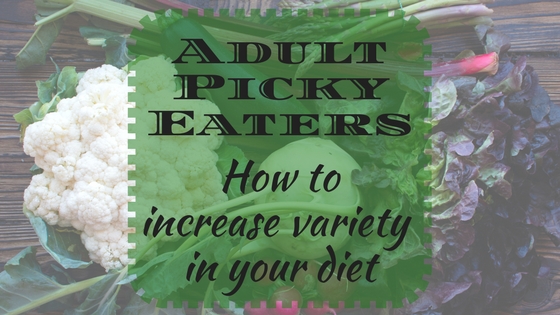 Picture the scene: A family celebration when the food comes out: Aunty A won’t eat soup; Cousin B won’t touch fish, or anything that came near it. Sister C won’t eat any vegetables besides carrots and celery, but is okay picking out the other veggies, while Nephew D will eat anything as long as there are mushrooms with it. And this is before any diets, allergies or restrictions come into play!
Picky eating is a childhood rite of passage that they eventually grow out of. But what of those who don’t?? Welcome to the adult world of picky eating.
Being a picky eater is not necessarily a problem. There’s no law that says you need to like every food that exists. If picky eating causes you anxiety or prevents you from socializing, it may be more of a concern (see this article about avoidant/restrictive food intake disorder [ARFID]). Otherwise it can be a health concern if you’re not meeting your nutritional needs; a difficulty finding what to eat; or an inconvenience living with a limited diet. Or it can be no problem for you! (But for those around you…)
Ellyn Satter statesthat while some aspects of picky eating are socially acceptable, such as choosing which foods you want (even if only one or two items), leaving unwanted food on your plate, and taking more of one food even if there’s uneaten food on your plate, it is not socially acceptable to draw attention to your food refusal or request food that is not being served.
So what do you do if you WANT to start eating a more varied diet?
I’ve had plenty of adult clients telling me they don’t like vegetables, but know they should be eating them. A friend told me her doctor advised her to eat more fruit, but she “doesn’t like apples”. Usually when I hear such statements I investigate. No vegetables? Are there any you like? Don’t like apples, what about berries? Or melons? There’s such a huge variety of foods that after a bit of probing they can come up with 5-6 vegetables they do like, and plenty of fruit they love eating! And just recognizing that is such an important move away from labeling yourself as a “non-veggie eater” that can move you towards a more varied diet.  True, a diet with many fruits and vegetables will likely be more colourful and nutrient dense than one with only 2 or 3 choices, but progress over perfection- allow yourself a judgement free, unpressured environment to congratulate yourself on your veggie success, and when ready, slowly introduce new foods and/or methods of preparation.
I recently tried a new salad dressing recipe. I knew it would be risky as my family enjoys their salad relatively plain, but I like to push their boundaries and experiment a bit (must be the dietitian in me!). Mom walked in the house and immediately smelled it, and exclaimed that I had ruined the salad, and wasted the blueberries I’d used as salad toppers. When I brought it to the table and served myself, she looked at it askance, and didn’t touch it. As the meal progressed without any comment or pressure for anyone to eat the salad, Mom put a small bit on her plate and tried it. Took a bit more a little later… By the end of the meal she told me “that salad was actually very good”!
As Ellyn Satter advises, provide yourself repeated, unpressured opportunities to introduce new foods. Don’t force yourself to try a new food, allow yourself the freedom to try it and the freedom to not finish it. By regularly exposing yourself to a new food, you just may trick yourself into liking it!
Sometimes, not liking a food is simply a matter of HOW the food is prepared. Nazima Qureshi RD MPH of Nutrition by Nazima admits in an Instagram post that she never liked green beans (though she would eat them if served, she wouldn’t make them herself). After some thought, she realized that the method of preparation she had been raised with left the green beans mushy and an almost grey colour- not appetizing! Determined to start a relationship with green beans, she bought fresh beans and sautéed them with only a few ingredients, and promptly loved them! Changing the method of preparation can significantly alter the appearance and taste of a food, making it a lot more palatable and enjoyable.
If you are a picky eater, and want to try introducing more vegetables (or other foods) into your daily repertoire, here’s the step by step:
1.       Take inventory of the vegetables you DO like eating and eat them more often!
2.       Chose a new veggie, and prepare it along with a favourite food
3.       Don’t force yourself to eat the new food, and don’t feel bad if you weren’t able to enjoy it
4.       Keep introducing and re-introducing new veggies – it will likely take many times of tasting until you’re used to a flavour, but don’t give up! Having a larger food base to choose from gives you more flexibility around meal time and can also lead to a healthier you!
Do you have a food you think you should be eating more of? How do you introduce yourself to new foods? Comment below 🙂 What are you hydrating on in this heat? Comment be

So many of my clients believe that eating a food w

It's another summer weekend, are you heading to th

An adolescent I've been working with for her eatin

How do you feel about your adolescent eating fat-c

I was speaking with a mom who is confused about he

Weight and health are not the same, and losing wei

Do you ever have this question? Tell me about it b

A mom DMed me recently asking me to talk about por

I've been discussing lately with parents how hard

You CAN support your adolescent's activity while e

Body image is not *just* body image, as it affects

Double tap ♥️ for raising adolescents with a g